How to do linear regression in Excel using LINEST

My friend was asking me for help with running linear regression in Excel. I had never tried this before, since I normally would use R for this purpose, but I finally figured it out. While I do not recommend using Excel for regression, if you have no choice maybe these instructions may be helpful. Here is a screenshot of what it looks like: 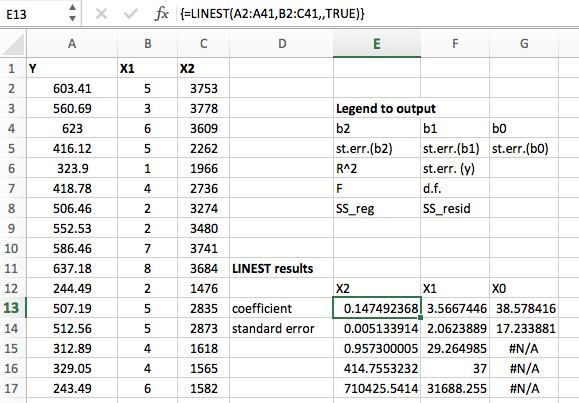 Let’s say we have a data table with columns Y,X1,X2. Y is the outcome we want to predict, such as dollars spent on food. X1 and X2 are predictor variables, such as family size and income. To run linear regression, use the LINEST command. This command is unnecessarily complicated. Suppose the data table occupies cells A1:C100 such that the first row are the column names and the actual values are in A2:C100. Suppose the outcome variable Y is in the first column (column A) and the predictor variables X1 and X2 are in columns B and C respectively.

Save the sheet as a CSV file and open R. Use the following commands to get the same result.